Icons in Danger and Desert Medicine by Birch Malotky

Joshua Tree National Park is a refuge. I don’t know if I’d decided this by then, sitting folded into the crook of Cyclops Rock, but I felt it.

The stone bench was smooth, from water and wind and hands and feet and seats, narrow enough to let our legs dangle over the edge, leaning back into the rock behind us. It was Valentine’s Day. It was our last night here. It was windless.

by Birch Malotky (all photos by Madison Brandt)

From above, the desert looked still and quiet, but I’m sure that had I pressed my palms against sand still warm from the day, I’d find it pulsing. The spaciousness of the land and depth of the sky couldn’t help but swallow the calligraphic movement of sidewinders, the click of grazing jackrabbits’ teeth, the tiny whumph of a leaping kangaroo rat. Needled desert plants breathed openly under a Milky Way gleaming as if to defy the nearby metropolis.

Across the way, Hidden Valley Campground was a moving mosaic. Fires burned the base of mythic granite formations; moonlight cooled their tops. Hollow metal frames slept with tires sunk in coarse desert sand, bodies at rest within them. Feet traced the path to the outhouse; hands jammed nighttime solos; faces leaned close into ruddy heat, eyes smiling and tired.

We studied the long view—bare rock and flatlands, a horizon impaled on the prayerful arms of Joshua trees, dun plains embroidered with the bayonets of smaller yuccas. The landscape bristled, resilient and uncompromising.

This kind of landscape is medicine. It is an actualized self, an accommodating openness, a freedom of expression. Here, space swallows and enables the individual, as life vies for its place. Such landscapes can teach strength, provide nourishment, and inspire dreams.

J Tree inspired me to dream. Its name was first spoken to me on a belay ledge in the Gunks, by reverent pilgrims who had been rained out of The Creek and found respite in the Mojave. Then, it was the storied sister of the Voo’s Sherman granite, which had forever marked my crack mentor’s hands. My final year of school, it was one of the parks I researched for my undergraduate thesis in conservation science and policy.

The idea of parks fascinated me. They protect some of the greatest wilderness we know, with careful fencing, well-maintained trails, ticket booths, a contingent of rangers, and exorbitant concessionaires. Until very recently, they were the best conservation tool people had, were even called “America’s Best Idea.” But their fences and rangers can’t keep out climate change. This fact somehow gave shape to the scale and severity of what I, and other conservationists, was up against.

I wanted others to realize this too. As an eager steward of this good Earth, I thought to pummel the unfeeling masses with my ominous truth: nothing is safe. Maybe that would shake their aplomb, curl their stomach with dread, hit them, as it were, where it hurts. By way of illustration, I aimed to discover if climate change was likely to drive any iconic species from the parks that protected them. Could Redwood National Park lose its redwoods? Saguaro National Park? Joshua Tree?

These questions landed me in a windowless lab at Brown, in dreary, climbing-bereft Rhode Island, inputting climate data and occurrence points into an array of screens, hour after hour. I languished, mainlining the Enormocast and dreaming of graduation. I made myself promises, looking at the little green square that was Joshua Tree National Park. There, I was sure, the weather was mild, the climbing superb, and the life simple and free. That was the dream.

Yucca brevifolia. I typed the name as an invocation, calling on the powers that would bring me to this desert idyll. As the season and my research progressed, I typed the name more fervently, watching my code spit out smaller and smaller range maps for this mysterious tree. Yucca brevifolia. It began to feel like a eulogy, one I didn’t feel prepared to write. I needed to get to J Tree.

A year later, I was five months into the dirtbag circuit, cozy as all get out in the bed of my truck and falling for my climbing partner. We rolled into J Tree late, found a campfire, cracked a beer, and swapped stories with the fire’s grimy citizens. In the dark, the land was a dreamscape, bulging with promises of mild weather, superb climbing, and a life that was free and easy.

The next morning, we woke to a girl singing and swinging from the tree above the picnic table. Over the rise came a friend from The Creek looking for his Hula-Hoops. Our site mate gave us the rundown on the area, lent us a guidebook, and sent us to the Wonderland.

My dream was becoming reality, and I fell in love effortlessly. From the Joshua trees to the palm oasis, the dirtbags to the Winnebago drivers, the coyotes to the stars to every granite absurdity laughing on the valley floor, J Tree inspired. The landscape was a union of miracles. Whole, defiant, and indisputably alive, it was a community that I wanted to be a part of, and wanted even more to save from fragmentation.

On edge: I eye the bolt above, stalling. A sea of granite separates it from me, perfect edges bobbing in between, each one slim, sharp, and chalked white as a crescent moon. My toes begin to protest. I refuse to back down.

Life in the desert is constantly on edge, battling high temperatures, food scarcity, and lack of water. Plants grow waxy, tough leaves that resist desiccation while animals take to the night and learn to metabolize water from a diet of dry seeds. Like the resilience of a dirtbag, desert resilience is the result of adaptation to the environment. Under certain conditions, however harsh, life can thrive. But conditions are changing. 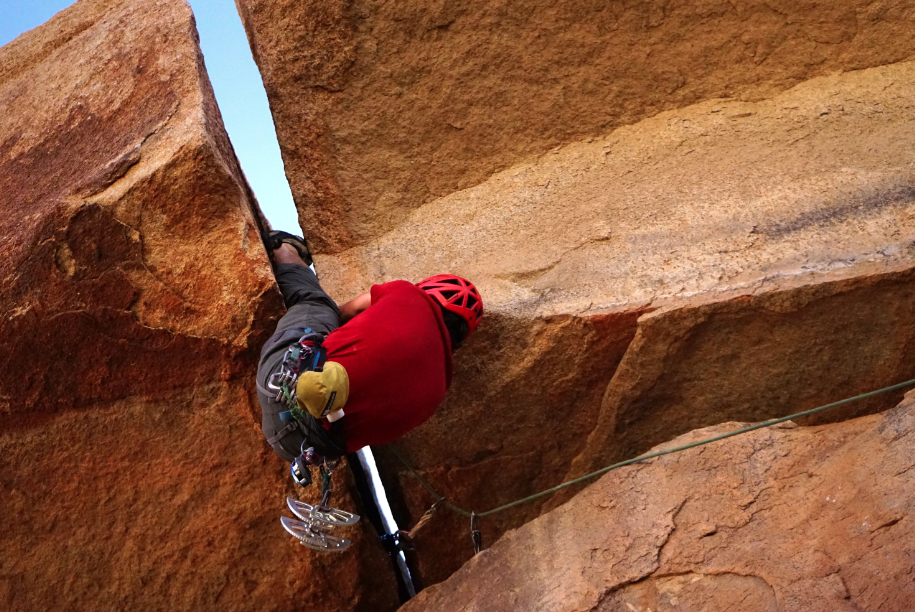 I launch into the sea of edges, delicate on the wall. I breathe desperate, deliberate breaths. I wonder if I could deck.

One of the main threats that climate change poses to life is loss of suitable habitat. At the extreme, this manifests as the inundation of low-lying islands or the melting of polar ice. More pervasive, however, are changes in temperature and precipitation patterns that accumulate to make parts of a species range uninhabitable.

For example, the fossil record shows that approximately 11,700 years ago, widespread warming made large portions of the Joshua tree’s southern range unsuitable for growth. While new territory probably became habitable at the same time, the Joshua tree was unable to expand into it because its primary disperser, the Shasta ground sloth, went extinct at that time. A rapid contraction of the Joshua tree’s range followed. Now history seems poised to repeat itself.

I reach a small bulge below the bolt; all that separates us is a thin mantle and a lot of air.

Already, researchers have noted that Joshua trees are germinating only in the most northern parts of the park. Models of future climate change, even those using conservative emissions estimates, predict a severe decline in suitable habitat for Joshua trees. By the end of the century, 90 percent of the Joshua tree’s current range may become uninhabitable, and there’s not much to be done about it.

When I finished my thesis, I was angry, because like so much of the change our burgeoning population has caused, the loss of Joshua trees felt senseless. And I was sorry, on behalf of my own consumption, the wanton hunger of my society, and the selfish power of my species. My anger and guilt demanded redress, but it was too late.

People, we, I, had set into motion a loss that couldn’t be stopped or recouped even if we changed our hearts. That stark fact terrified me, and I wallowed in fear of helplessness, nearly lost.

I went to J Tree looking for hope and hoping for answers. I sat atop Cyclops Rock on Valentine’s Day and played out a silent movie of loss on the skyline, each Joshua tree succumbing to fire, rot, or desiccation. I watched the last one uproot, and as it turned to walk over the horizon, I begged it to look at me, begged it to tell me what to do.

There are a whole slew of problems in the world, some of them minute and heartbreaking, some vast and seemingly inexorable. In their midst, it’s hard not to tread water for lack of understanding the currents. Conservation work feels a lot like having no idea where or how far land is but kicking off anyways, on the utter faith that there is land, and wherever it is, it’s better than drowning at sea.

The reality of change is unavoidable, even as I resist it. J Tree is a breathing history of all the forces and lives that have shaped it. It is the diving of plates beneath others, the melting of rock and its slow excavation, the colonization of those rocks by fierce desert plants, by First Nations, by pioneers, by climbers. It is Joshua trees as fodder for sloths the size of bears, sandals underfoot, corral posts around the first cattle, fuel for the first mines, and witness to first ascents. It is a park that may lose its namesake but not its promise, a landscape that may lose an icon but not its capacity to heal.

Dwight Pitcaithley wrote in The Hour of Land, A Personal Topography of America’s National Parks, “The National Park Service is not a preservationist organization. It is an educational organization. We preserve these sites because they have stories to tell and we have something to learn from these stories.”

We are constantly learning.

I pull over the bulge and find myself at the anchors, awash in adrenaline and relief. I look out and see a spare landscape that doesn’t have the capacity to support the timid or lazy. Climbers, like all life in J Tree, need mettle to drink the desert’s medicine. I stand triumphant, not because I had sent, but because I persisted through doubt, uncertainty, and fear. As the adrenaline subsides, elation takes its place.

I can’t stop the climate from changing. I can’t will a Joshua tree’s delicate flowers to bloom, can’t tell its seeds to drop, can’t love the seeds into sprouting. Even so, J Tree’s crystal sands and needled green are the land I swim toward, because it’s better than drowning in helplessness. Love is the difference between hope and despair when we realize that nothing can last.

I look down from the anchors; the ledge I’m standing on is limed with bird droppings and dirt from spring runoff. The route, however, is Solid Gold. It is a gift from the past, an homage to the life and landscape it was born from. The J Tree of the ’70s may be past, but it isn’t gone as long as its routes continue to tell their stories.

Birch Malotky is on track to dabble away her twenties around the country, which she’s fine with, as long as climbing is involved.

This piece is an excerpt from Volume 12 of The Climbing Zine.